Although he stepped away from professional football in 2013, Beckham has continued to live and breathe the game. Beckham has played in numerous charity matches, trained with former teammates and has even created his own signature Predator with adidas.

David Beckham is one of the most recognizable soccer players in the world. He began his career in the Manchester United academy, winning the youth league with one of the greatest generations ever to play in English football. He started out his career like most, wearing the adidas CopaMundial, before becoming one of the biggest faces of the storied and historic Predator silo. 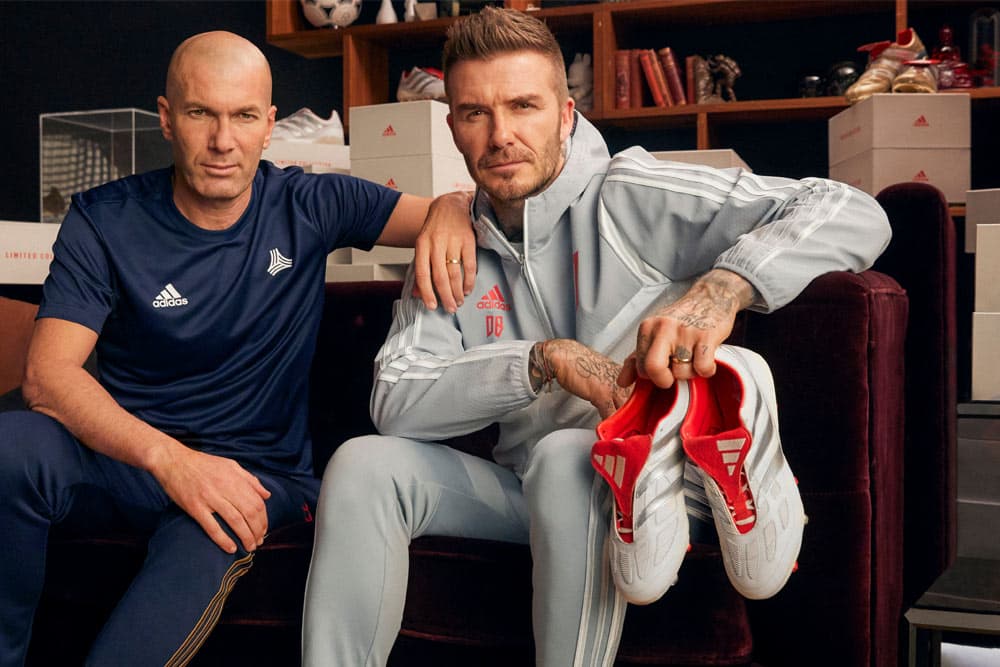 To celebrate 25 years of Predator history, adidas tapped David Beckham and Zinadine Zidane to create some of the most exclusive Predator remakes to date. Inspired by his 2001 free kick goal to help England qualify for the 2002 FIFA World Cup, the Beckham Predator Precision remake is a white-based beauty. Becks always preferred white boots, and the red tongue on the firm ground pair adds a nice nod to England. The rest of the collection includes David Beckham Predator sneakers, jersey and jacket. It doesn’t get much better than this for Beckham fans. 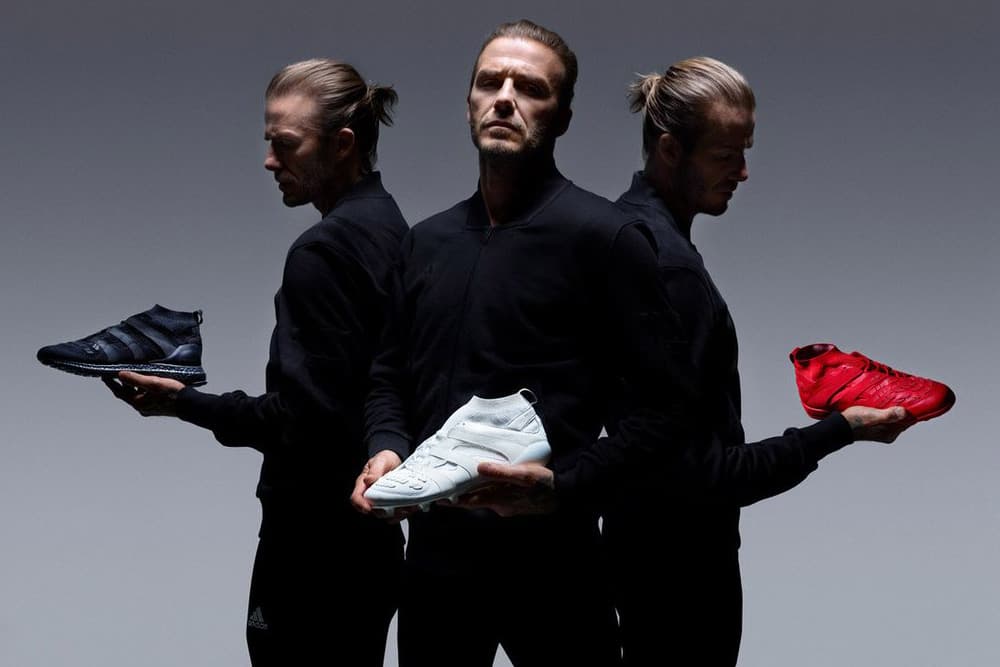 So many Predators, so many special moments. In 2017, Beckham teamed up with adidas to create his first ever capsule collection, which featured stadium, turf and street versions of unique Predator Accelerator hybrids, all inspired by different stages in his career. The triple white FG pair represents his time at LA Galaxy, the triple black Ultraboost is inspired by his time with Paris Saint-Germain and AC Milan, and the triple red turf version pays homage to his time with Manchester United and England. 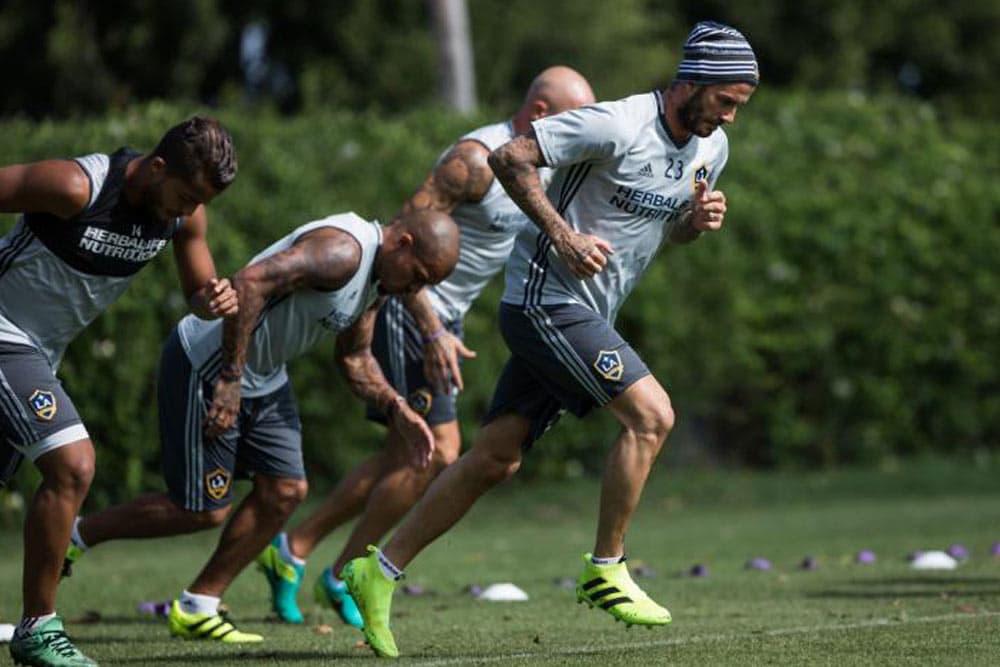 Becks still was enjoying his post retirement football, training with the LA Galaxy. Rocking the solar yellow ACE 16+ Purecontrol colorway, Beck’s seemed like a perfect fit for the control silo, always being able to play that perfect pass. 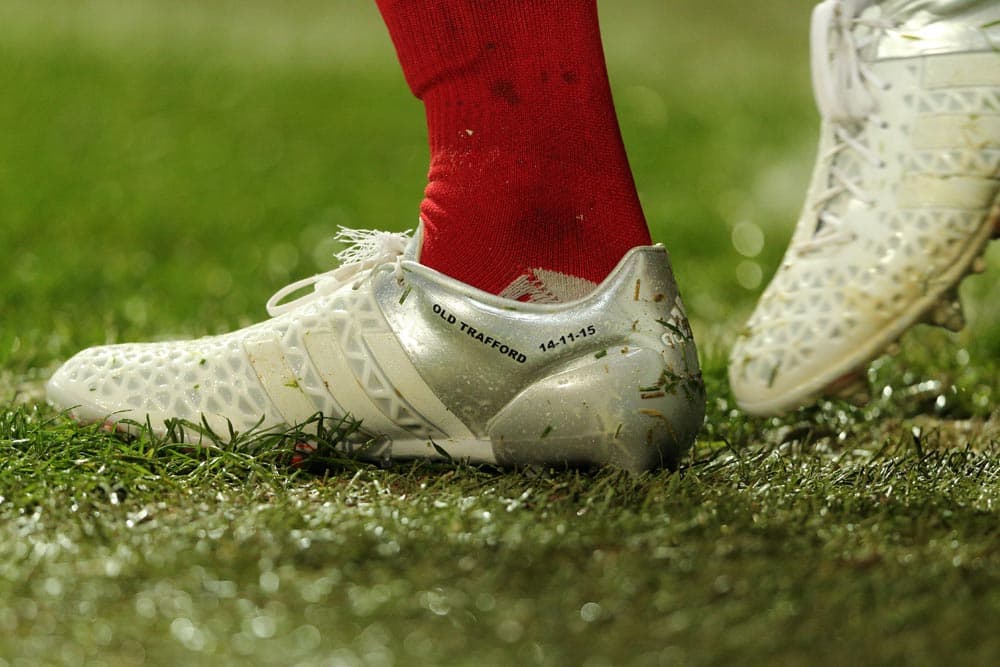 Beck’s made another appearance during a charity match rocking an all white pair of ACE 15.1. This marked the first time he stepped into the updated generation post-Predator.

From the academy to first team, the building of a legend. 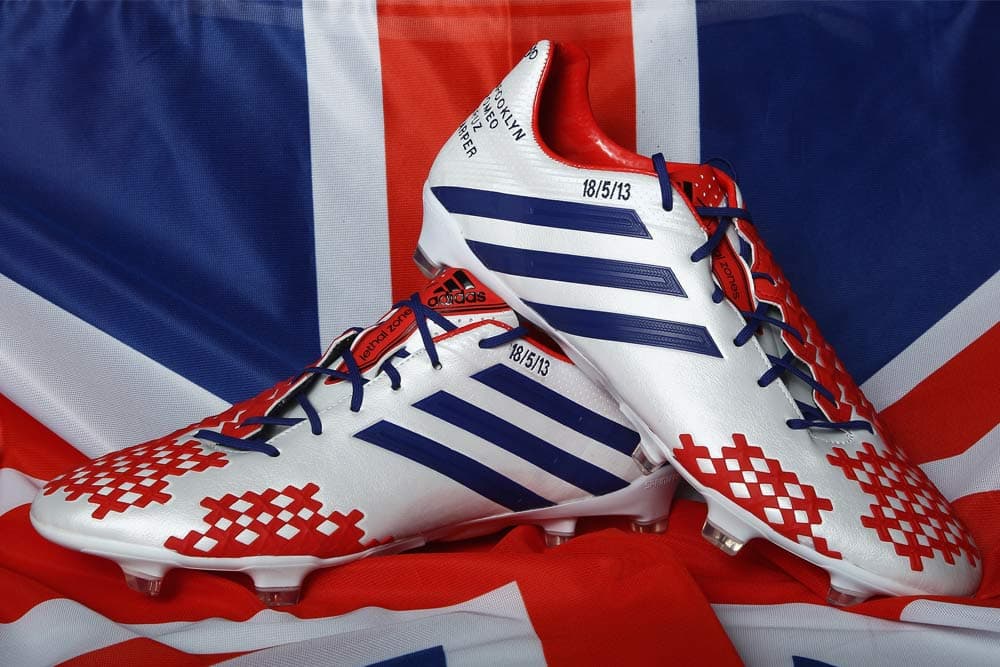 The day that brought tears to all of us Beckham fans around the world, May 18th, 2013. His final game of his career. Stepping onto the field in a special white, red, and blue Predator LZ II, Beckham swung in a corner and assisted a Matuidi goal. As he left the field in tears, subbed out after 80 minutes, we couldn’t help but think back to the massive mark that David Beckham left on the world’s game.

As David Beckham started wrapping up his time in MLS, the Predator LZ made its way to his feet. His iconic pink, white, and black colorway was worn in honor of his daughter, Harper Seven, being born. When he made the move to PSG, he donned a special miadidas Predator LZ colorway, perfectly matching up with the Paris kit.

The Predator adiPower was worn by David Beckham as he played his testimonial match at Old Trafford, making us reminisce on his glory days with the Red Devils. adidas gave him his own special gold and red colorway to mark the occasion. It was also in this model that Becks helped lead LA Galaxy to the 2011 MLS Cup. Becks also scored a screamer in a navy/electricity colorway, which was widely available to the public. 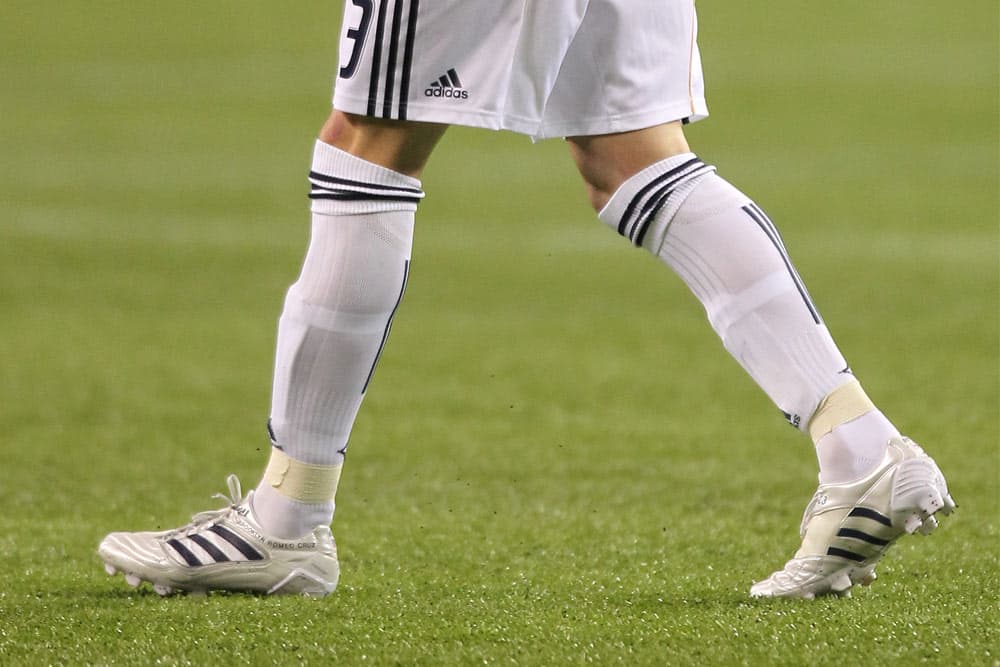 Debuted in multiple signature colorways while at LA Galaxy, and even a bit at AC Milan. This was one of the first Predator lines to use Tarus leather, a soft and simple replacement for kangaroo leather.

The Powerswerve is where Beckham utilized his creative ability. While on loan at AC Milan, we saw adidas’ Climacool technology make its way onto his signature Predator, offering a classy white and blue colorway with a perforated upper and a larger strike zone of Predator elements. He even scored a 70-yard goal against the Kansas City Wizards (now Sporting KC) in another signature white and gold colorway, paired with a blue and gold colorway to match the Galaxy strips. adidas also created a gold and white colorway to honor Beckham when he made his 100th appearance for England.

The Absolute made its debut during Beckham’s closing time at Real Madrid, and during his transfer and debut with LA Galaxy. He wore a blue, silver, and red pair during the World Cup in Germany, playing for England of course. This model featured the England dragon embossed over the synthetic blue upper. Another DB Absolute pair made its way onto the scene in a classy maroon and silver colorway. The Absolute was one of the first to feature a synthetic upper, a feature that was specific to the Beckham signature line.

The Pulse was the first boot to see a full commercial Beckham exclusive colorway. One, a super limited edition collectors item, one, a majestic silver with the England dragon which was the first made available to the public in large numbers, and a third in a white/blue colorway that also featured a dragon design. 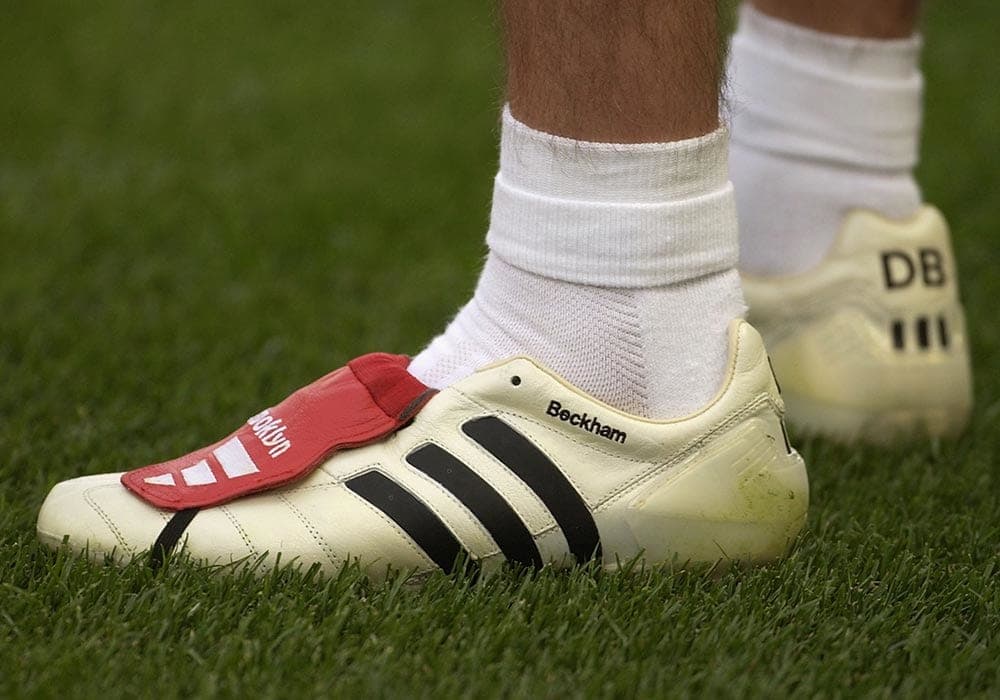 The Mania has been hailed as one of the most iconic Predator’s ever made. Remember that gorgeous pair of Champagne Predator’s worn at the 2002 World Cup? Well, David Beckham does. As one of his favorite pairs, Becks was one of the few players to actually continue to wear the Champagne colorway all during the tournament. 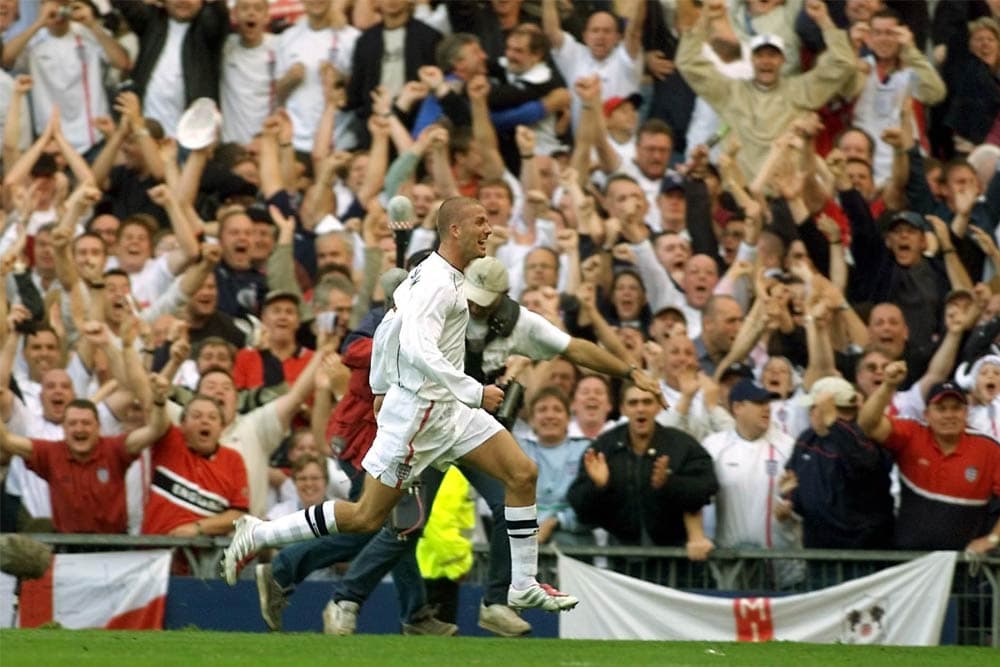 One iconic moment in Beckham’s career came at the last moment in a World Cup qualifier against Greece. England need one goal to make the 2002 World Cup, and Beckham in his Predator Precision, steps up and buries a beautiful bending free kick into the top corner, sending England on their way. 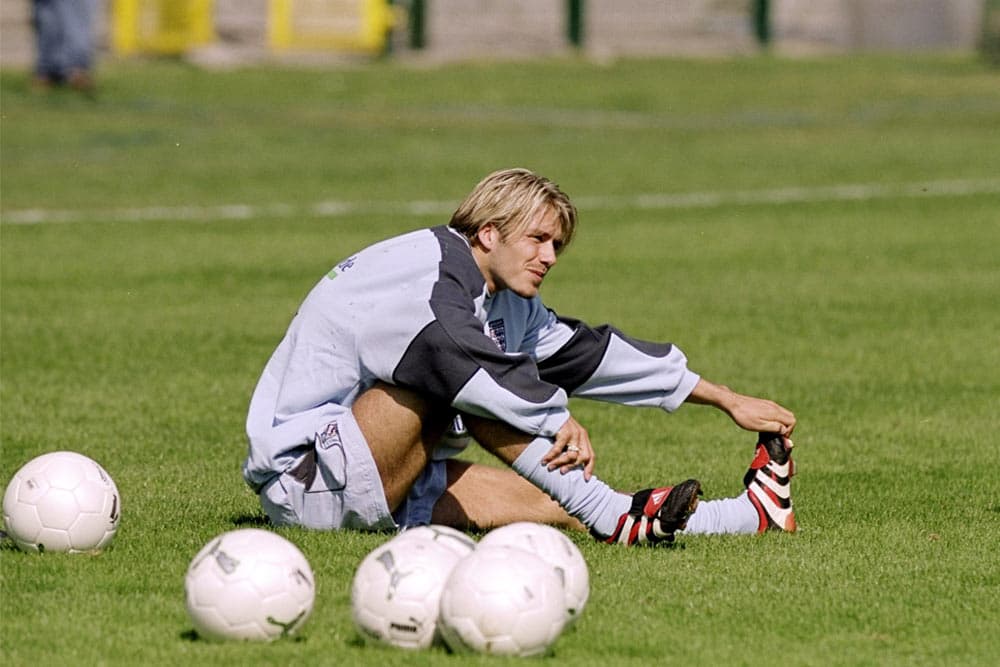 David Beckham continued his England career rocking the Accelerator, and hence the reason we saw the modern twist on the Accelerator for his Beckham Pack. It’s where Becks started things off, spraying perfectly placed crosses and bending in free kicks all over the field. Beckham played in integral role with the Accelerator, scoring against Tottenham to help secure an FA Cup trophy, and helping again to bring home the Premier League. This was also the boot that Becks was wearing when he swung in two perfectly placed crosses against Bayern Munich in the ‘99 Champions League Final. If you know the story, then you know Beckham and United went on to complete the most difficult accomplishment in the game, winning the Treble. 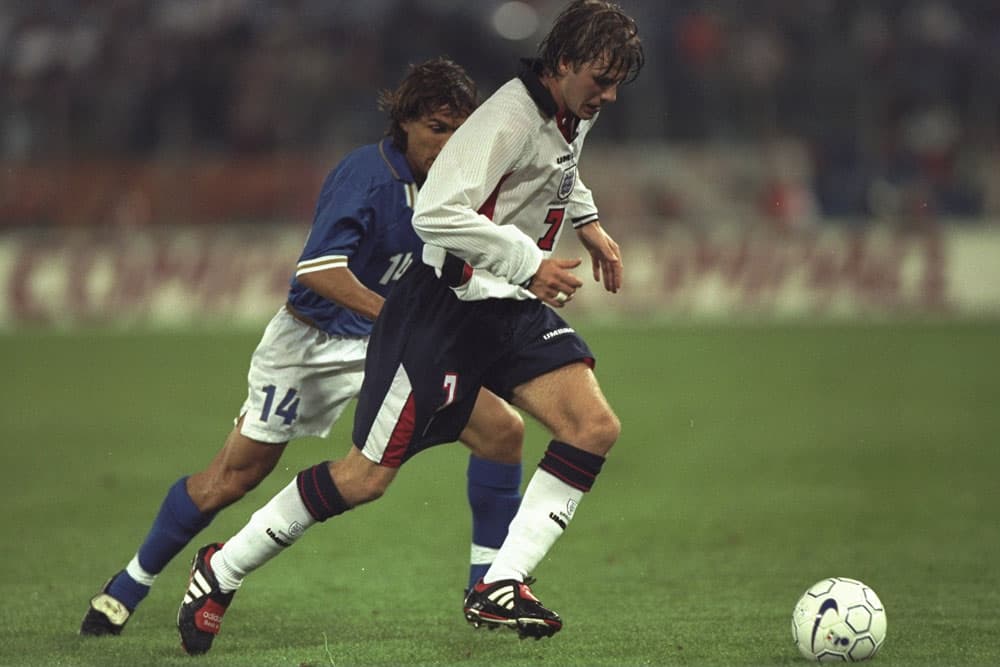 Although he’s known for wearing the special #7 jersey for Manchester United, before that he was outfitted in shirts no. 10 and 24. It was at this time when David Beckham brought his talents to the field in the Predator Touch. It was in this boot that he smashed in his iconic midfield goal against Wimbledon, launching his name into the spotlight around the world

Inspired by Beckham’s game and style? Continue his legacy and shop the adidas Predator collection today from SOCCER.COM

What is your all-time favorite David Beckham adidas Predator? Drop us a comment in the section below.

Get your subdomain of family.blog

#wanicancook and now you can too!

A weekly podcast about improving your mental health and wellbeing.

All About Polish Hockey. All in English.

Health, Fitness, and Relationships is a great way to start living again.

We are a not-for-profit community organisation, supporting the organic cause in the local area and inspiring more people to garden organically.

Recipes for Weight Loss by a Registered Dietitian. No Added Sugar, No Refined Grains!

KINDNESS IS FREE, sprinkle it all over the world and 😁 smile

Where art, delicious food, and world travel are incorporated into the home with a feminine twist!

Get the Latest happening in the world of Sports, Education, Fashion, Health and Fitness, Travel and all Nigeria News First Hand

Thoughts on creative activity in my life ...

Listen to your inner self..it has all the answers..

You can escape to financial freedom...

Out of My Write Mind

The blog of Sandy J. White

For the Bohemian Chic Digital Nomad in You

Want to learn the simple way?

My rocks are the memories from different adventures. I thought I would just leave this bag here.